During the 19th century, most of the choirs of the city of Bern were men’s choirs. Nonetheless, there were also mixed choirs.

The Cäcilienverein der Stadt Bern (Society of Saint Cecilia of the City of Bern), founded in 1862, was probably the most famous. Renamed Oratorienchor Bern in 1973, nowadays it is the oldest mixed choir in the city of Bern. 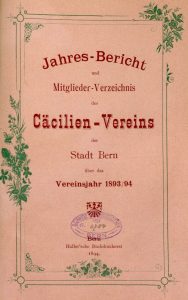 This project has received funding from the European Union’s Horizon 2020 research and innovation programme under the Marie Skłodowska-Curie grant agreement No 833366.